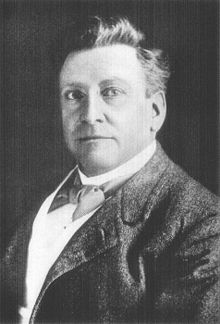 William Hesketh Lever, 1st Viscount Leverhulme (19 September 1851 – 7 May 1925) was an English industrialist, philanthropist, and politician.
Lever started work at his father's grocery business in Bolton but, as a businessman, he is noted for founding the soap and cleaning product firm, Lever Brothers, with his younger brother James in 1885. He began manufacturing Sunlight Soap and built a business empire with many well-known brands, such as Lux and Lifebuoy. In politics, Lever sat as a Liberal MP for Wirral and then as a Peer (as Lord Leverhulme). He was an advocate for expansion of the British Empire, particularly in Africa and Asia, which supplied palm oil, a key ingredient in Lever's product line.
William Lever was born on 19 September 1851 at 16 Wood Street, Bolton, Lancashire, England. He was the eldest son and the seventh child born to James Lever (1809–1897), a grocer, and Eliza Hesketh, daughter of a cotton mill manager. He was educated at Bolton Church Institute between 1864 and 1867 and worked in the family grocery business from 1867 until he was given junior partnership in 1872.
Lever was a member of the Congregationalist Church and applied its ideals in his business life. On 17 April 1874, he married Elizabeth Ellen Hulme, daughter of a draper and neighbour from Wood Street, at the Church of St Andrew and St George (then Congregational, now United Reformed) in Bolton. William, their only surviving child, was born at Thornton Hough in 1888.
Lever moved to Thornton Hough in 1888 and bought Thornton Manor in 1893. He subsequently bought the village which he developed as a model village. His London home was The Hill at Hampstead, bought in 1904. He bought and demolished neighbouring Heath Lodge in 1911 to extend the garden. The Hill was his main home from 1919. In 1899 he bought Rockhaven in Horwich and the Rivington estate in early 1900. He built a wooden bungalow on the slopes of Rivington Pike in 1902 which was burned down in an arson attack in 1913 by suffragette, Edith Rigby. Its stone replacement was his summer home until his death.
Lever began collecting artworks in 1893 when he bought a painting by Edmund Leighton. He founded the Lady Lever Art Gallery in 1922, dedicated to his late wife.
In his later years, Leverhulme became deaf and kept a klaxon horn by his bed to wake him at 5 am. He took up ballroom dancing late in life. Throughout his life he thought the only healthy way to sleep was outdoors in the wind and the rain.
Leverhulme was involved with freemasonry and by 1902 was the first initiate of a lodge bearing his name, William Hesketh Lever Lodge No. 2916. He later formed Leverhulme Lodge 4438. He saw freemasonry as a tool to reinforce the hierarchy within Lever Brothers. He was a founder of the Phoenix Lodge 3236 whilst an M.P in 1907 and a founder of St. Hilary Lodge No. 3591 founded 4 May 1912, then Past Pro-Grand Warden (P.P.G.W) and Immediate Past Master (I.P.M). He was appointed Senior Grand Warden of the Grand Lodge of Mark Master Masons of England in 1919 and co-founded a number of lodges. He was Provincial Senior Grand Warden of the Provincial Grand Lodge of Cheshire.
Lord Leverhulme died aged 74 of pneumonia at his home in Hampstead on 7 May 1925. His funeral was attended by 30,000 people. He is buried in the churchyard of Christ Church in Port Sunlight, Cheshire. He was succeeded by his son, William Lever, 2nd Viscount Leverhulme.
Business.
After working for his father's wholesale grocery business, in 1886 he established a soap manufacturing company, Lever Brothers, with his brother James. It is now part of Unilever. It was one of the first companies to manufacture soap from vegetable oils, and with Lever's business acumen and marketing practices, produced a great fortune.
In 1887, Lever looking to expand his business, lought 56 acres (230,000 m2) of land on the Wirral in Cheshire between the River Mersey and the railway line at Bebington. This site became Port Sunlight where he built his works and a model village to house its employees. From 1888, Port Sunlight village offered decent living conditions in the belief that good housing would ensure a healthy and happy workforce. The community was designed to house and support the workers. Life in Port Sunlight included intrusive rules and implied mandatory participation in activities. The tied cottages meant that a worker losing his or her job could be almost simultaneously evicted. Even workers' social lives were policed from the head office.
W.H Lever stated "a good workman may have a wife of objectionable habits, or may have objectionable habits himself, which make it undesirable for us to have him in the village."
He built many houses in Thornton Hough which became a model village comparable to Port Sunlight.
Lever was a lifelong supporter of William Ewart Gladstone and Liberalism. He was invited to contest elections for the Liberal Party. He served as Member of Parliament (MP) for the Wirral constituency between 1906 and 1909 and used his maiden speech in the House of Commons to urge Henry Campbell-Bannerman's government to introduce a national old age pension, such as the one he provided for his workers. On the recommendation of the Liberal Party, he was created a baronet in 1911 and raised to the peerage as Baron Leverhulme on 21 June 1917, the "hulme" element of his title being in honour of his wife.
In November 1918 Lord Leverhulme was invited to become Mayor of Bolton though he was not a councillor because the council wanted to honour a "Notable son of the Town" as a mark of the high regard the citizens of Bolton had for him. He was High Sheriff of Lancashire in 1917. He was elevated to the viscountcy on 27 November 1922.
Home Page | 1870 onward | Garden City Movement | Garden Cities | Garden Suburbs | Community Assets | The People | Places | People & Places | Architecture | The Societies | Events | Articles | Future | Oral History | Other Activities | Conservation | Learning | Visiting Moor Pool | Contact Page | Other Links | Acknowledgments | General Site Map
Back to content | Back to main menu